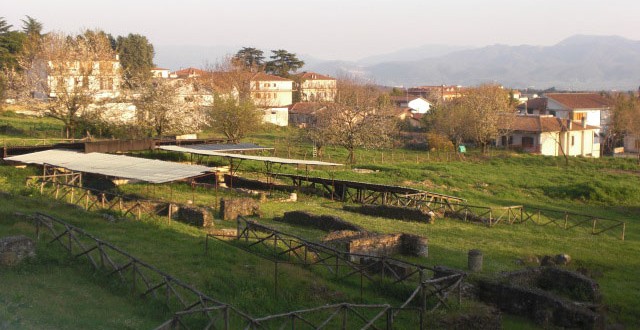 The typical Roman House, which was widely distributed (from the beginning) even in the Latin cities such as Praeneste, was called domus by the Latins. Today archaeologists indicate with this word urban single-family housing, variable-size, whose rooms are articulated around a central opend courtyard (atrium) that provides light inside the rooms, usually closed to outside for safety reasons. At the Centre of the Atrium, around which runs a small portico supported by columns or pillars can be placed a tank for the collection of rainwater (impluvium), while the rooms on opposite side at the bottom were used to carry out functions of representation – owner receives guests in the tablinum-and often welcomes in the dining room (triclinium; coenatio). With the improvement of economic conditions the domus are made in more luxurious way. Starting from the late Republican era, behind the Atrium an arcade courtyard (peristylium) is added, surrounding the garden that opens to other rooms. Domus with peristylium is usually surronded with dining rooms and the rooms for representation as well as with kitchen looking on garden.

The houses of the imperial age at Praeneste are often set up on earlier buildings. These are sometimes reused with minor modifications, as it is the case of space recently discovered in the north of the so-called macellum, other times they are amended and supplemented by new structures just like the large house visible from the Arcioni street, upstream of the archaeological area. It is a domus with atrium and peristylium, reshaped in the Imperial age (between the 1st and 3rd century AD) where we can see the expansion of the previous republicans buildings, perhaps merged to form a single larger housing complex decorated with beautiful mosaics in polychrome as well as in black and white colours and wall paintings.

The peristylium of another reshaped Republican Domus in the first Imperial age is currently visible in the large parking area at the intersection of streets Pio XII and street Madonna dell’Aquila, where is still preserved a stretch of the ancient Prenestina street. In the courtyard of a private residence in via Ceciliana is finally preserved (and publicly opened) the frescoed corridor along a third Domus, remodeled between the 1st and 2nd century AD, but set to a core that dates back at least to the beginning of the 1st century BC, which in turn, had taken the place of a small demetriac shrine.

The National Archaeological Museum of Palestrina

The National Archaeological Museum of Palestrina, hosted inside the Colonna-Barberini Palace, was opened in 1998; …